Private Equity Fundraising Is Off to Strongest Start Since 2008

Private Equity Fundraising Is Off to Strongest Start Since 2008

Last year’s massive private equity selloff has propelled fundraising in the U.S. to its highest first-quarter level since the onset of the economic downturn in 2008. 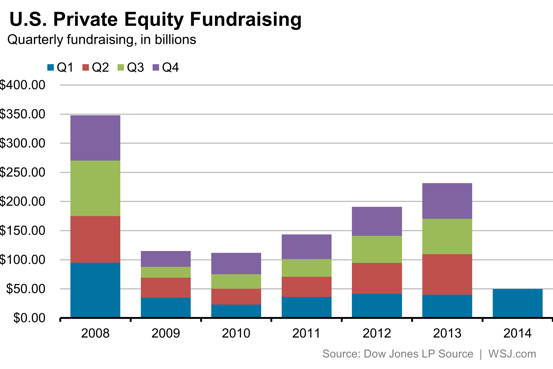 Year over year, fundraising for buyout and corporate finance funds climbed 38% to $33.09 billion, as firms including H.I.G. Capital, New Mountain Capital, Clayton Dubilier & Rice and GI Partners held closes on more than a billion dollars apiece for their latest funds.

Despite all the market euphoria, limited partners continued to hedge their bets with funds focused on distressed and special situations. The closing of the latest restructuring funds from Castlelake and Kohlberg Kravis RobertsKKR +3.03% & Co. drove fundraising for distressed and restructuring funds to $3.43 billion, up from $1.19 billion a year earlier. For 2013, such funds raised a combined $38.65 billion, the highest amount since 2008 when $48 billion was raised.

Although appetites for generalist strategies remained strong, fundraising for industry-focused vehicles declined in the first quarter, during which three funds raised a combined $305 million. That compares with $764 million raised by four funds a year earlier.

The continued appetite for energy-related plays, however, bolstered fundraising for real assets funds by 21% to $6.86 billion, up from $5.65 billion a year earlier.